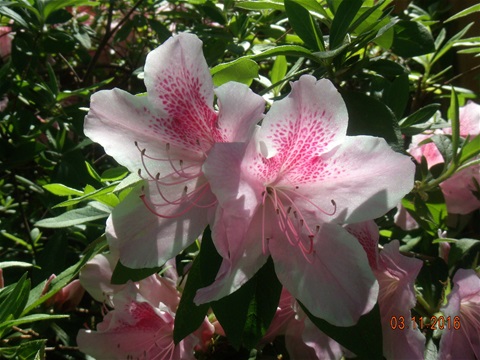 We can begin our study with Genesis 1:26, where God made mankind in the Holy Trinity's ("Our") image and likeness, and gave male and female authority over the earth:

"God said, Let Us [Father, Son and Holy Spirit] make mankind in our image, after Our likeness; and let them have complete authority over the fish of the sea, the birds of the air, the [tame] beasts, and over all of the earth, and over every thing that creeps upon the earth."

Genesis 1:26 states that God created man "in Our image" (Hebrew: tselem), "after Our likeness" (Hebrew: demuwth).  The first word, tselem, means statue or resemblance.  A statue of something or someone brings to mind not only visual appearance, but also its internal characteristics and everything it represents.  God also said that mankind should be formed after His own image and form by using the word demuwth.  This word also means "decoy," referring to "outward form," 1 (see Notes) as in the image on a coin.  By using these two Hebrew words together, there is an emphasis that man and man only was made in the likeness of the Creator in that man is a spiritual being, like God, with an immortal soul.  Yet there is an infinite distance between God and man in the fullness of the nature of each.

The image of God lies in man's nature, not in his physical body, for God does not have a body of flesh but is a spirit, infinite and eternal.  Man's soul bears God's image in that it too is a spirit; it is immortal; it is where our conscience lies, which has been given to us by God.  Man was made to "bear the image of God's meekness, mercifulness, heavenliness..." 2 (See Notes); to love righteousness and abhor sin.  Man had been given dominion over the earth and its lesser creatures, and was in a sense God's governmental appointee on earth.  God gave man (and woman) external bodies which facilitated their roles on earth, those He created for them, in tending the garden and raising a family.  We'll see in Genesis 3:22, however, that God didn't impart all of His spiritual nature to man, for it was only after the Fall that man became "like God" in that he could distinguish between good and evil.

In Genesis 1:27 we see the evidence of God's intention for male and female, which together formed "man" of mankind, to operate in conjunction as one whole unit within the earth:

Male and female both were created in God's own image, both were given his internal and spiritual characteristics, and together as one entity within the species they were to have dominion over the rest of the earth and its living creatures.  Male and female were both vital parts to creating one whole.  The male of the species was created first, with the female coming after as his "helpmeet" and completion of her male counterpart.  From Genesis 1:27 we get a glimpse of God's original intention:  that both were created in the same image of God, with the same capacity for learning and growth, and together they were to exist as one complete unit within the species that was to govern God's earth.

One other point also sets the foundation of God's original intentions for mankind.  In Genesis 1:22, God blessed fish and fowl with "fruitfulness," the Hebrew word being parah.  In Genesis 1:28, God also blessed man and woman with this same gift, but a different Hebrew word was used: rabah.  The word rabah has the connotation of not only fruitfulness in physical reproduction, but that of multiplication -- of becoming great in number -- of steady increase.  As such we get the idea that God looked at man much differently than His other creatures.  Where the population of all other species might be controlled in some way, God intended mankind to be a much greater force upon the earth.  Remember at this point in time there was no death in the flesh for man; that only came as a result of the Fall.